Melanie appears regularly in the media and blogs on a range of national and international issues:

Politico, Why the EU can’t outsource its migration crisis

New Statesman, The people of Mosul need our help more than ever

Third Force News, The third sector is stronger as part of the UK

LabourList, From foodbanks to fair pay

Amplify, Internationalism is in Labour’s DNA

Progressonline, Time is running out for a two-state solution

The Herald, A country’s size does not determine its effectiveness as a donor nation

Haaretz, In Hebron, you don’t ask ‘why?’

The Guardian, G8 still has a mountain to climb on tax avoidance 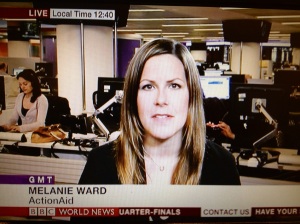 Progressonline, From CofE to LWN

Progressonline, A race to the top on tax dodging

LabourHame, A Woman’s Place is in the Union (of Great Britain and Northern Ireland)