If you only knew…

“The arc of the moral universe is long but it bends towards justice.”

This quote is from Martin Luther King. In my three months in Hebron I thought of it many, many times as I walked around seeing all of the injustices that are done there.

I also thought: if only more people knew what really goes on there then surely things would change.

When I witnessed some of the things that I did, one of my first thoughts afterwards was always: how do I tell people this? How can I explain what it is like to see these almost unbelievable things happening before your eyes? How do I explain what the Israeli army’s occupation does: the daily humiliation that it inflicts upon so many Palestinians?

There are so many things I saw and experienced there that I haven’t told you about in my writing. I haven’t told you about the enormous checkpoints at Bethlehem and Tarqumiya and Qalandiya where thousands of Palestinians have to squash into barred walkways that resemble large cages as part of their journey to work each day (although I made a short film from the Bethlehem checkpoint which you can view here).

Palestinians queue to go to work beneath the separation wall at checkpoint 300 in Bethlehem at 4.41 am on 4 November 2013

There are two peoples’ stories which, for me, help to express the situation there. They are the stories of an Israeli and a Palestinian, both in their 80’s and born one year apart.

The first is a Jewish woman called Esther* who I met in Haifa. Esther was born in 1933 in Hungary and, as a little girl, she and her family had to hide from Hitler’s Nazis. Surviving this, in 1949 she fled the Soviet Union authorities in the dead of night and travelled for two weeks without her parents. Finally she made it to the safety of the newly created state of Israel. She has been an Israeli citizen ever since, and raised her own family there. I had lunch with Esther and her family on the beach in Haifa.

The second is a Palestinian man called Abd who I met in Hebron. Abd was born in 1932 in what was then British Mandate Palestine. He worked as a shepherd and survived British and then Jordanian rule in his homeland. In 1968, after the 1967 war when the Israeli army occupied the West Bank, soldiers set up camp near his home on a hillside in Wadi al Ghrous, Hebron. After a while the soldiers’ tents were replaced by the caravans of Israeli settlers. This became the huge settlement of Kiryat Arba in Hebron, now home to around 8000 Israeli settlers. All settlements are illegal under international law. The expansion of Kiryat Arba saw it move closer and closer towards the home of Abd and his family.

Then one day twelve years ago, the Israeli army came and demolished Abd’s home, citing “security reasons” – this often happens to Palestinians who have the misfortune to live near expanding settlements. Only the rubble remains.

The remains of Abd’s house, demolished by the Israeli army. The settlement of Kiryat Arba stands in the background

When they came to destroy his home, a soldier pushed Abd, breaking his arm. Abd and his wife then lived in a bus on the land next to their demolished home for ten years. When I met Abd he was ill and still unable to use his arm, which has never healed properly from the injuries he sustained the day his house was demolished. Abd is deeply pessimistic about the future, “There will be more wars unless God intervenes to help us.” 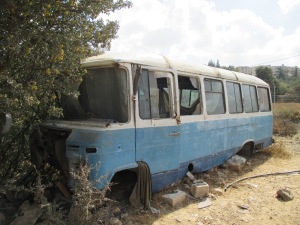 Both Esther and Abd have stories that could make you weep with sadness. Esther’s best friend, who she fled Hungary with, went on to have a daughter who is now a leader of the settlers – the people whose behaviour has led to Abd’s misery.

Esther’s son Shlomo*, also an Israeli, told me he was disgusted by the behaviour of the settlers. He told me that sometimes, to him, they are comparable with Palestinian militant organizations. But Shlomo said that achieving peace would not be as complicated as it is often presented to be, “Everyone knows what the basics of a peace deal look like. The question is whether they want it.”

A just peace and the end of the Israeli occupation of Palestinian territory may seem very far away. But there is something that each of us can do to help bring that day closer. On the ground in Hebron, my Palestinian friends in Youth Against Settlements including Badia, Issa, Abed and Murad constantly find new ways to non-violently resist the attempts to force them from their homes in H2. They recently succeeded in renovating a building to become a kindergarten for over 20 Palestinian children.

Israeli soldiers and settlers tried to stop their work some 15 times but the Palestinians succeeded nonetheless. This kindergarten is now one of Youth Against Settlements’ own facts on the ground in H2.

The view of Israeli settlement Beit Haddassah from the new kindergarten

Israeli activists from Ta’ayush (which means living together) risk arrest every Saturday to support and protect Palestinians from Israeli soldiers and settlers whilst they do simple tasks like picking olives and grazing their sheep in the West Bank. One of the Ta’ayush activists, a university lecturer in Classics, told me that he had been arrested by the Israeli authorities more than 40 times for what he does at the weekend.

In the face of such acts the things that we, who are not in Israel and Palestine, can do to help bring about change seem small – but they are no less important.

You can email your MP and ask them to write to the Foreign Secretary to help stop new settlements in Hebron.

You can be careful about what you buy in the supermarket: new guidance from the British government and EU means that products which come from Israeli settlements now have to be labeled as such. You can choose not to buy these, and tell your supermarket manager why you are doing this.

Look out for labels like this in the supermarket. This one is from dates sold by Tesco.

You can tell your friends, family, colleagues and community about what is going on – point them to this blog or the thousands of other sources available on the internet.

All of these things will help to build up the pressure for change.

When I was out there in Hebron, I thought that if only you knew then you would do something.

Now you do know.

So what will you do?

*not their real name