Welcome to the ghost town

After greetings and introductions, these were Hashem’s first words to us. I had recently arrived in Hebron from the UK, via Jerusalem, to spend my first few days getting to know my work as a Human Rights Observer (or Ecumenical Accompanier/ EA).

He stands with us, a small group of EAs from different countries, in the shade at the top of Shuhada Street in Hebron. Hashem is Palestinian, a Hebronite, born and raised here. He takes out a small video camera and shows us footage of what he has described.

The Israeli settlers who are his neighbours accused Khaled, his 5 year old son, of throwing stones at them. Israeli soldiers then turned up at the home of Hashem and his wife Nisreen, wanting to investigate Khaled. This came a few short weeks after the detention of another 5 year old boy, Wadi’a Maswadeh, by the Israeli authorities in Hebron, an act which contravenes the Convention on the Rights of the Child. Hashem tells us that he showed the soldiers Khaled, who was playing on his computer, and told them that he had not been throwing stones. He told them that his settler neighbours often make up stories like this and that anyway, the army was not allowed to arrest children, and on no account would they be taking his son. The soldiers said that this visit should be taken as a warning but if it happened again then they would be back to take Khaled, and then Hashem would have to pay for his son’s release.

This situation will be inconceivable to many of you. Imagine a hostile army turning up at your door to take away your child. But in the three days spent in Hebron in my first week here in Palestine-Israel as an EA, I discovered that it was one of many disturbing incidents that are a regular feature of life for Palestinians in occupied Hebron. 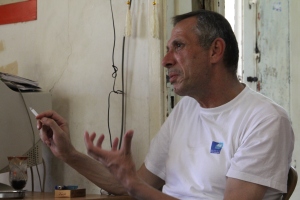 Hashem telling us about life in H2, Hebron

Hebron is a city of two halves. Literally. On one side is a bustling Palestinian city – the biggest in the West Bank. It is run by the Palestinian Authority and has many restaurants, cafes, shops, supermarkets and a shopping centre, as you would except in any other city. It has a fruit and vegetable market and a souk in the Old City. This part of Hebron was designated as H1 under the Oslo Accords of the failed 1990s peace process.

Then, as you walk towards a portacabin that blocks off a street in the city centre, you notice there are fewer and fewer people, there is anti-Israel graffiti and fewer shops open. The portacabin is actually Checkpoint 56. Walking through that checkpoint in like stepping into another world, like some kind of perverse Alice Through the Looking-Glass. On the other side are young Israeli soldiers with large guns who check your ID. This is an area of Palestinian territory that is occupied and controlled by Israel. It was designated as H2 under the Oslo Accords.

From Checkpoint 56 you step out into the top of Shuhada Street, which is where we meet Hashem. Shuhada Street has become famously symbolic of the ghost town that is now H2.

The area is all but deserted. It used to be the heart of commercial Hebron, filled with shops, homes, the main market, and people going about their business. In 2000, Shuhada Street was closed to Palestinians. Over 1800 businesses have since closed, according to Israeli human right organisation B’TSelem. Now, over 1000 homes stand empty and abandoned. The Israeli army has sealed many of the shops and homes – if people still live there, they often cannot use their front doors. A series of roadblocks, walls and military checkpoints separate H1 and H2, ensuring that only the small group of around 500 Israeli settlers who live there can go about their lives as they please (more on the settlers in future blogs). 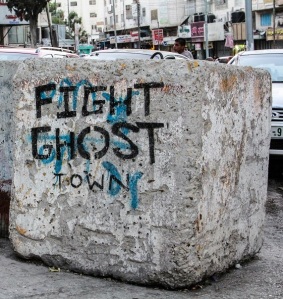 Graffiti on the H1 side of Checkpoint 56

The Israeli settlers and army can drive and walk anywhere they like. The Palestinians cannot. It’s that simple. My international passport means that I can walk down Shuhada Street but Hashem and Nisreen, whose hometown this is, cannot. They each have a permit to get to their own home. They are forbidden from driving a car to it. Hashem is also forbidden from crossing into H1, now the heart of Palestinian life in Hebron.

Hashem, Nisreen and their family live in their home in H2, which is right next to some Israeli settlers on a hill called Tel Rumeida. Hashem walks us up the hill towards his home. At the end of his street are two more Israeli soldiers. By this point, four young Belgian tourists have joined our little group, and I have my first experience of the way that the soldiers appear to make it up as they go along.

Hashem tells them that he is taking the group of about eight of us internationals to his home for tea. No, they tell him, only he can go and the rest of us cannot. We challenge this and ask for evidence. They backtrack and eventually call their commander. They then decide to check our passports and want to see our visas. One of the Belgian tourists does not have a visa. This is because his father is Palestinian, so he has a green Palestinian ID card to go along with his Belgian passport. Ah, the soldiers tell him, you are a Palestinian. You cannot walk down this street. Everyone else can go, except you. The Belgian/ Palestinian is perplexed and angry – we all are. The soldiers call their commander who shows up (he can be no more than 23 years of age) to confirm their decision. So, we go on to Hashem and Nisreen’s house without him.

Another day, we (the other Hebron-based EAs and I) are having tea with some of the Palestinian shopkeepers by the Ibrahimi Mosque/ Tomb of the Patriarchs and Matriarchs when we notice two young Palestinian men crouched in the shade next to the nearby checkpoint. My colleague and I go over to ask one of the two Israeli soldiers what is going on. “ID check” comes the reply from a young soldier who can be no more than 19 years old, “We need to check if they are bad people.” We ask how long this will take, “3 hours” comes the response. We laugh, incredulous, “You can’t be serious” we tell the soldier, “You know that the longest you can detain someone is 20 minutes or else it’s an arrest.” The young soldier looks confused. “I am new” he says to us, “and this is what I was told.” He goes to ask his soldier colleague inside the checkpoint but the other soldier refuses to engage with us. We retreat a bit to watch from a distance. Shortly after this, the soldiers let the young men continue on their way.

In the following days, I see this kind of situation repeated many times – frequent, random ID checks on ordinary people going about their day-to-day lives seem to be standard practice in the parallel universe that is the ghost town.

I am surprised that the soldier seems to have no idea about the law. Later, when I am back in Jerusalem for training, I ask Avner about this. Avner is 28 years old and a veteran soldier who works for Breaking the Silence, a fantastic organisation of former Israeli soldiers who “have taken it upon themselves to expose the Israeli public to the reality of everyday life” in the occupied Palestinian territory. I ask Avner whether the soldiers are taught about the law during their training. He tells me that they are taught nothing about any kind of law. Instead of the law, the soldiers are taught to carry out their orders. Typically in Hebron, this includes orders to “instill a sense of fear in Palestinians”, to “make your presence felt” and to “disrupt the day-to-day lives of Palestinians”.

Like the child detention, much of what goes on in Hebron is illegal under international law. Under international human rights law, namely Article 13 of the Universal Declaration of Human Rights and Article 12 of the International Covenant on Civil and Political Rights, Israel is required to respect the right of residents of the occupied Palestinian territory to move about freely. As the occupier, international humanitarian law also requires Israel to ensure the safety and wellbeing of the local residents and to maintain, to the extent possible, normal living conditions.

After these first three days in Hebron, I travel back to Jerusalem for more training sessions with EAPPI. When I get there I have the space to think more deeply about what I have seen in Hebron in the last week. In my first blog post I described that on previous visits to Hebron I had found it to be the strangest place I had ever been; I was not wrong. I try to understand the things that I have seen.

How does it make sense to treat the Palestinians this way? Whose interests does this situation serve? What are the Israeli authorities hoping to achieve?

On our subsequent training in Jerusalem, we meet an Israeli named Hanna Barag, who monitors checkpoints with other Israeli women in the organisation MachsomWatch. “Who is going to Hebron?” she asks us all. My three team-mates and I raise our hands, and she looks at us, “If you have come here to have a good time, then you have made a mistake.”

“Hebron is impossible to understand.”

4 responses to “Welcome to the ghost town”